Okay, I really don’t celebrate Halloween with parties or dressing up proper. Certainly not like Heidi Klum’s skinless costume this year. That sort of dressing up doesn’t really appeal to me. I’m also not a fan of blood, gore, guts, or anything else vividly horrific. Suspense, sure. Horror, no.

I suppose I would get more into the holiday, except that I live in a high rise apartment building that has security and guards. So, there’s not so much in the way of children going door to door. I do wish my building has some sort of Halloween party for the kids, though. You know, they could go down the stairs to a few floors and go door to door at the apartments with Halloween decorations on the door. Maybe even recruit and print up a list of apartment numbers, for the people participating who want to give out candy. Hmm. That’s an idea. I should try setting that up in a few years, whenever Jeff and I start having kids. (If I did it now in our childfree state, I’m afraid I might be pegged as some sort of pedo/weirdo.)

Jeff and I did have some fun last weekend–we carved pumpkins, I baked turkey and made homemade pumpkin pie, and I tried a couple of different pumpkin seed recipes. 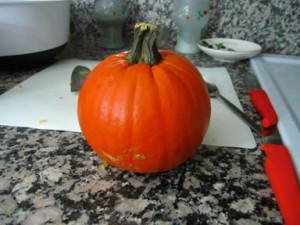 We picked up two pie pumpkins at Trader Joe’s, because I wanted to experiment and try to make my own truly homemade pumpkin pie. One person said online that a 1 1/2 lb  pie pumpkin produces exactly the amount of pureed pumpkin we need for the pie. I wasn’t too sure, so I bought two. The recipe says to cut it into chunks and scoop out all the seeds and seed strings. I used a strong paring knife. It barely cut into the surface. I used my bigger knife. Still couldn’t cut the damn thing. So I used a serrated knife to try to saw into the surface so I have a groove to work on, then wedged my big knife into it, and wiggled it around. I wondered if I would be making a trip to the ER before it was over. Would boiling it remove any blood stains?

Mercifully, the damn pumpkin made a crack! sound and I was able to pry it open. Damn thing. It was much more difficult to cut into a itty bitty pumpkin than our Jack-o-lantern pumpkins. Geez. Then I had to do it AGAIN for the second pie pumpkin. Once I cracked the pumpkin into two halves, it was easier to break it into chunks. 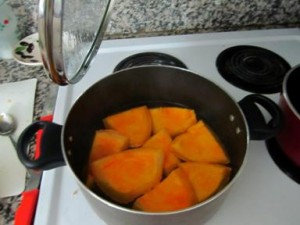 I then boiled them until they were tender to a fork, then I drained the water and scraped the flesh off the shell. Actually, they were so tender the flesh just fell off the shells. Handy, since it was really hot. I mashed up the pumpkins, and saw that they had absorbed a ton of water from boiling. So I reduced it in a small pot to try to steam off the excess water. That helped. 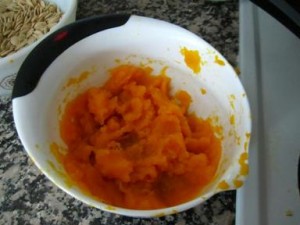 Mashed pumpkin. I was able to use just a fork since it was so tender.

After Jeff and I carved pumpkins and had dinner, I proceeded to mix up the pumpkin pie recipe. I put in the prescribed amount of seasoning, but it didn’t smell like pie yet. So I doubled it–and it smelled perfect. After baking, this is the result: 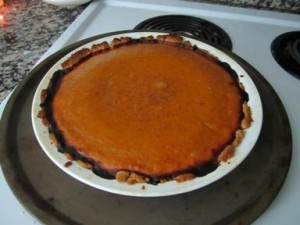 It tasted exactly like the canned pumpkin pie recipe.

It tasted exactly like the canned pumpkin pie recipe, so while this was a fun experiment, I’m going to stick with the cans in the future.

And for the curious, here is Jeff’s pumpkin and my pumpkin (in order.) 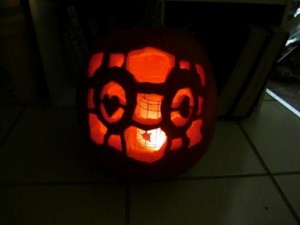 Disclaimer: I never played Portal. I just enable my husband's love of the video game.