Of trolls and discussion, of free speech and comments 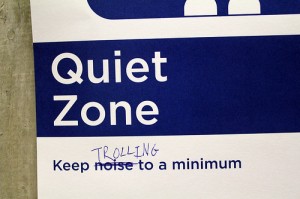 Trolling the librarians by quinn.anya, used under Creative Commons licensing

DO NOT FEED THE TROLLS.

That’s common sense advice, isn’t it? If you feed the bullies, the Internet Tough Guys, they feel like they have to continually retaliate. Any attempt at reasoned discussions with the ITGs results in logically-flawed verbal volleys hurled your way until you get fed up and delete all their comments and disable the comments on the offending article. Ignoring the bullies takes away their reward mechanism: attention. Basically, they’re attention whores with a narcissistic streak. “I think big thoughts, and everyone will be amazed at my verbal prowess and will bow down and believe!”

There have been a lot of discussion about comments lately in a blogger group I belong to. One mommy blogger was viciously attacked by a mens’ right group for expressing a preference to have a female class helper take her preschool daughter to the restroom, instead of a male class helper. Another blogger’s daughter was uninvited to a party after other moms disagreed with the blogger’s post. Other bloggers who opened up about their stories for Domestic Violence Month have received insensitive comments by jerks who don’t believe that what happened was actually abuse. Of course, the political bloggers are the lightning rods for trolls.

The easy solution would be to disable comments on our posts. Voila, no trolls! But what good is posting online if you can’t spark a discussion? Isn’t that the whole point of sharing our news and our thoughts? Without comments, we’re just…noise. People will get bored and move on.

We could instead  watch the comments like a hawk, moderating out all the jerks, racists, [blank]-ophobes, trolls, and other comments that don’t add to the discussion of the story.

Yet, that censorship inherently troubles me. On Facebook, I have an easier time justifying deleting trollish comments because it is my personal space, and I can decide what can be said on my wall, just as I have the right to decide to kick a rude guest out of my house. Yet I try my best to allow a wide range of views from my friends, who represent a wide range of political and religious beliefs (from the raging liberals to the fundie conservatives) just because discussion is GOOD, so long as nobody is personally attacked.

News sites are facing similar issues of what the author termed “comment ghettos.” While reading the Chicago Tribune, I’ve been noticing how they quietly disable commenting on some crime stories. I haven’t done any actual data-gathering legwork to see whether they disable commenting when the story is about a “safe” neighborhood, or whether they disable it if the victim is part of a minority group, or what. They have no official policy posted on their website about the criteria for enabling/disabling comments for each story. If they have such policy, I think they ought to make it publicly available as a means of improving reader relations and avoiding accusations of “censorship!!!1!1!” They do, however, indicate at the bottom of every article that if the commenting becomes particularly nasty, they will deactivate the comments: “If warranted, we will take down entire comment boards.”

An article on TribNation, which is associated with the Chicago Tribune, explains that sometimes the “comment  ghettos” can scare potential news sources and interviewees off.  It can also scare the more reasonable commenters off, as well, so that could be a reason for the Trib to restrict commenting on a number of stories. I know I hardly ever comment on Trib articles myself, because I know that, no matter what I say, I will get flamed by the trolls. As you can see from the link, some news sites have even largely moved away from allowing comments at all.

In contrast to the Chicago Tribune, the Chicago Sun-Times seems to rarely turn off commenting for their articles. Sure, reading them is like diving into Mos Eisley, but at least they aren’t censoring them, right? On the other hand, having such a hive of scum and wretched trolls imparts a sour, oily feel to the entire Sun-Times website. It makes it feel more like a rag than a proper journalistic paper, while the Trib is trying to maintain their image.

It seems that there is no easy solution for solving the problem of trolls and balancing open discussions with the need to clamp down on the hateful people. It is largely up to each newspaper, each blogger to articulate what their comments policy will be and figure out how to enforce said policy.

I know I have no comments policies yet–I ought to formulate one, shouldn’t I? Perhaps that will help me avoid the worst of the trolls in the future whenever my blogs become wildly popular…or is that wishful thinking? LOL!

2 Responses to Of trolls and discussion, of free speech and comments