So, after we took Solomon back, the PAWS foster coordinator offered us a choice of kittens. Some pairs, some trios, and then these 6 kittens. Jeff and I decided to go for the 6 kittens to see what that’s like.

We took them home, and boy, do 6 kittens ever poop, pee, and want to be held. All at the same time, of course. These kittens especially liked sitting on our shoulders too, for some reason. 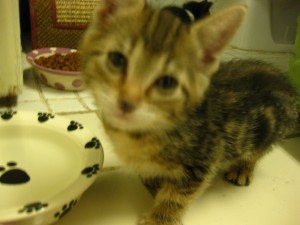 Here’s Cyla–she was the prettiest of the bunch, with beautiful markings on her fur. She was also a very active kitty–couldn’t sit still long enough for a picture. She’s the one who succumbed to feline Panleuk, sadly. She was just fine, but then on Sunday she became lethargic, and Sunday night, we were scrambling around trying to get her to a vet that PAWS was partnered with, way out in Berwyn. Jeff and I still didn’t know what we were dealing with, just the fact that she was very very sick. After messing around with CTA and Metra for so long, we decided to come back to the apartment to feed her and let her pee before taking the cab out there (PAWS said they would pay for it). I fed her some formula by syringe, and she was sorta eating it, so we hoped it was just a bug. Even though I had completed a night shift overnight Saturday, I volunteered to stay up with her to make sure she was doing okay. We took her to the PAWS vet Monday morning. On the cab ride there, she was very very limp, and slept most of the time. Toward the end of the cab ride, she became frentic, biting me, acting weird and hyper, before falling back to lethargy.

The vet looked at her (and Kyo, ’cause he had a cold). The PAWS coordinator came out with the news about Cyla. She had Panleuk, which along with sister virus, Parvo, is very deadly to kittens. It hits them fast and hard, and there was nothing they could do for her except ease her suffering by putting her to sleep. I was trying to be brave, but I started crying.

Hell, I’m crying now. I had a feeling about Cyla’s prognosis, but it didn’t help me feel any better, that inkling. Jeff was really upset too, but he stayed strong so we could get home in reasonable shape.

Because Cyla had Panleuk, the 5 surviving siblings had a much higher risk of the same. It’s contagious to other cats, so Jeff and I decided to take them all back in order to protect our existing cats, and in order to scrub down and bleach the place, especially the bathroom. It’s a virus that only bleach or Trifectant can kill/deactivate–alcohol  and triclosan does absolutely nothing for it.

Pumpkin was acting a bit weird, so I took her into the vet just in case, because she was recently vaccinated, but they weren’t sure if it was in full effect yet or not. Mistletoe was fine. $200 and 3 hours later, Pumpkin was ruled to be okay–and both the girls are still doing great.

Anyway, here’s moar pictures of kittens to try to brighten up this crappy post:

Here’s Lali, the grey one, 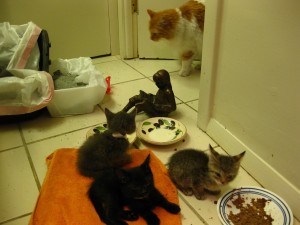 Pumpkin checking on the kittens while I fed them. You can see grey Lali, black Kiba, and I think that’s Maggy eating there.

Here’s Cyla standing on the back of Jeff’s chair. That, or our shoulder, was her favorite perch. 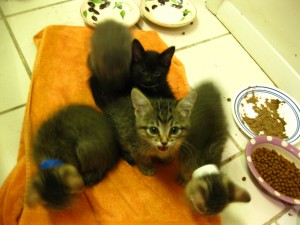 Isla is very vocal about wanting to be held! I think that’s Maggy on the right. Kyo is to the left of her. Kiba behind her, and Lali behind that one. Cyla was out on the chair, I believe.

They weren’t quite weaned when we got them, so we gave them some KMR, which they loved.

Oh yeah, we’re not fostering any more kittens for at least a month and a half, to give us time to disinfect our apartment and allow the virus to die–we don’t want to expose more kittens to the virus. So, after Thanksgiving, we may be back to fostering, maybe.