I fell behind on posting updates on the kittens we foster–so here’s the kitten we had for a month! 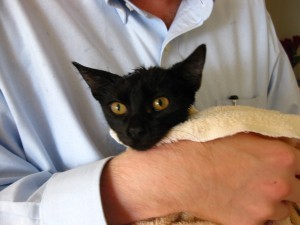 She came to us so very tiny, and reminded us of Squeaker, except without the tipped ear. She was very skittish and timid, though. She hid under the bed for a long time, or under the daybed in the living room, and she wouldn’t come out to eat or drink. Several times we had to try to nudge her out with the handle of a broom, so we could catch her and put her back in the cozy bathroom. I spoke of her in this post about the flooding bathroom.

Well, after that incident, until we could get the bathroom cleaned up, and the paint repaired, we kept Beretta in a large dog crate with a small litter box, food and water. To keep her feeling “cozy” we draped towels over the crate. Pumpkin and Mistletoe visited her a lot, yet she was still shy. Warming up, but shy. Pumpkin figured out how to eat her food through the bars, somehow.

We brought Beretta out a couple times a day to play with her and hold her, to help her understand that we love her. When the bathroom was all better, we put her back in there. Strangely, after the few days in the crate where she could watch us and the other cats from safety made her more sociable. Because of her cold, we had her for a while longer to give her antibiotics and help her get well. During the course of antibiotics, she grew tremendously, and she started playing around with our cats a bunch.

When we took her in for her spay surgery a month later, we took home another kitten, Solomon. He needed just a little bit more time to grow before going to the adoption center. We assumed he was a boy because of the name. He had some sort of allergy that the vet at PAWS was trying to figure out by running a battery of tests, so meanwhile we fed him special food that doesn’t have the ingredients allergic cats are most allergic to. We had him for maybe a week, when PAWS said that he could come back in anytime for his surgery. We were told, when we picked him up, that he was already fixed, so we let them know. They checked on his files, and lo and behold, Solomon was a girl, and she was spayed already! 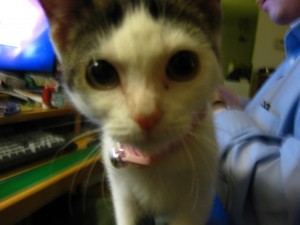 She also doubled her weight in less than a week, which is very surprising, and which was exactly what she needed.

When we took her in, we brought home a litter of kittens. That’s another post because there is kind of a long and sad story associated with it.